Few cities in the world can boast such a concentration of world-class golf than Melbourne; or, more specifically, the little pocket of land in the south-east we know as The Sandbelt.  This gently undulating sandy strip of ground is the perfect environment for great golf, and at the southern tip of this region lies Peninsula Kingswood.

Peninsula Kingswood is the first of its kind in Australia – the merger of two established clubs, Peninsula and Kingswood, each a century old.

Peninsula’s history began during the golf boom in Melbourne, just at the time that Alistair Mackenzie visited and left such an indelible mark on our game.  In 1925 the club acquired 450 acres of stunning golfing terrain, mixing sand, undulating ground and large sections of virgin bush land.  The original 18 holes took up some parts of the course we know today (1, 2, 7, 8, 9 and 10 of the South) but extended well beyond, over Skye Road and McMahons Road to the nearby school John Paul College – where the clubhouse stood.  In the 1960’s the club elected to move clubhouse sites to where it sits today and changes to the main course (the South) were made along with the construction of a new 18 holes known as the North Course.  The architect engaged to make these changes was Commonwealth Manager and architect Sloan Morpeth – a gifted golfer and admirer of classic design.

Over the years the two courses would see their share of changes but still neither quite lived up to their potential.

Starting in 2014 the courses underwent their most recent and significant upgrade.  No course on the sandbelt has undergone such a major renovation in such a short space of time.  The aim was to realize the potential of the site and to create a true sandbelt experience, both in design but perhaps more important conditioning.  Bunkers and creek-lines were constructed to add to the strategy, fairways were drained, tees added, paths built and extensive work was made to the vegetation.  No doubt though, the biggest talking point comes with the putting surfaces.  A new construction method and a variety of bent grass in Pure Distinction has finally given the club consistently firm fast greens which rival the best in the world and complimenting the strategies set up by the new design.

Whilst the intention was never to create two distinctly different designs the nature of the site suggested that the North would always feel a little different to the South.  The North, playing over sandier and more undulating ground, with perhaps the best examples of heathland vegetation of any course in Melbourne, was always intended to be a pure sandbelt experience.  Firm and fast, with tilted greens, expansive bunkers, wide fairways and roughs featuring that distinctive combination of sand, native grasses and heathland vegetation that the region is known for.

Since the original Peninsula course was developed into a 36 hole facility in the late 1960’s, the South course was always regarded as the longer more difficult test.  Built over flatter ground than the North its open, more manicured look often had it labeled (incorrectly) as a parkland.  The new design looks to capture its sandbelt origins.  Greens and bunkers were built in a style and scale which closer matched its more famous neighbors, reworked bunkering and green design putting more of a premium on positioning from the tee.  Vegetation was removed to open up views across the course and many thousands of plants and grasses added to complement bunkers and tee carries.  Perhaps the most unique characteristic of the new design has been opening up of the original creek lines, which proliferated the site and now form a key part of the design on at least half a dozen holes. 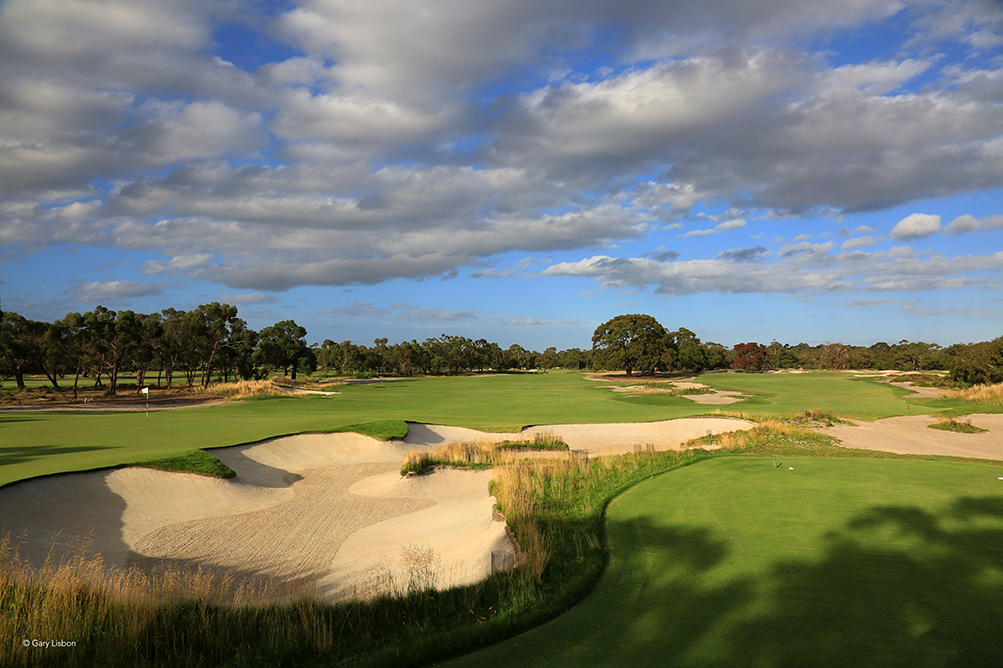 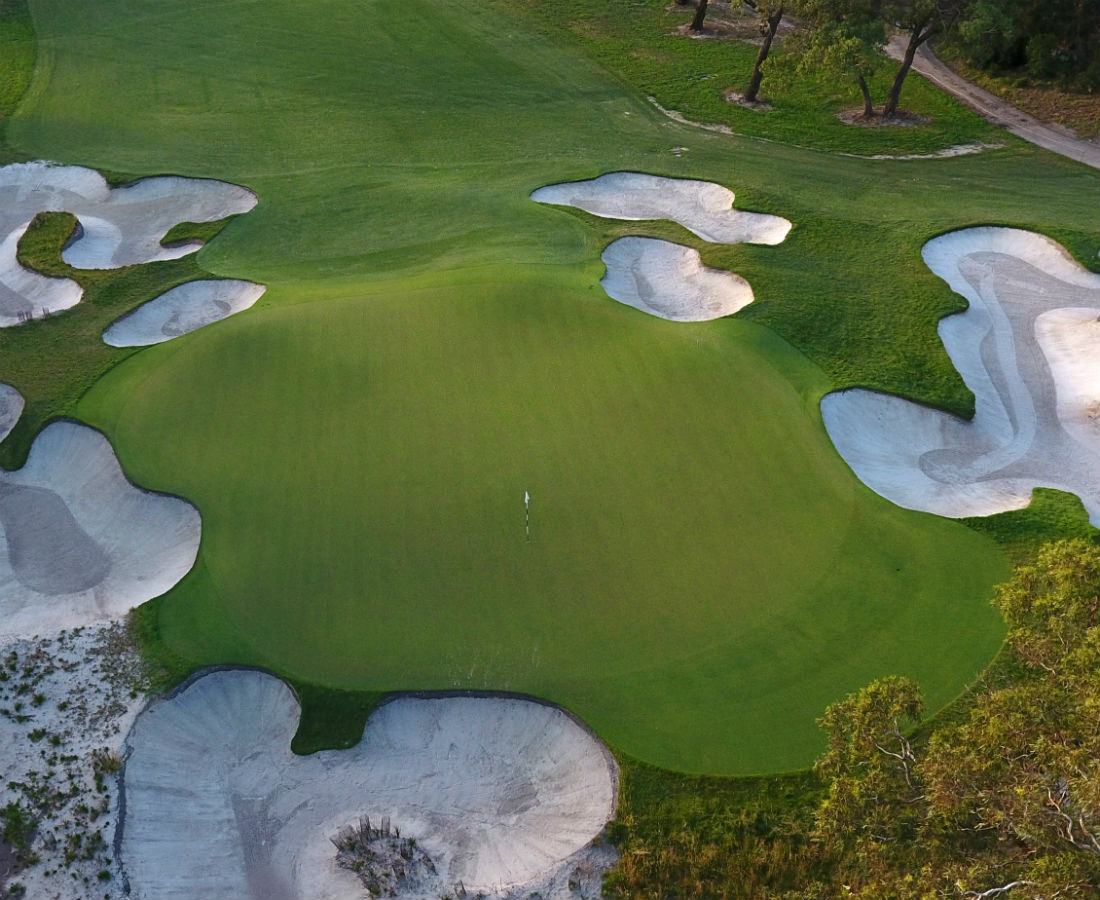 This is the most difficult long hole on the South Course. The drive must find the hogs- backed fairway to set up a long second because if the drive is missed the player is guaranteed a difficult third to a three level green that requires the player to pitch the ball the required distance.

A long second played to the left edge of the fairway leaves the player with the ideal angle for the pitch.

The diagonal left to right line of the fairway and greenside bunkers force all but the longest hitters to make a choice of both line and club from the tee.

The wide green has difficult pin positions in both the left and right wings and the best line for the drive is left when the pin is right and right when the pin is left – unless, of course, you like pitching over bunkers.  Some like the visual definition of a bunker lip to carry but the majority prefer the open lines that are the reward for a well thought out tee shot. Look for the pin position before you tee off! 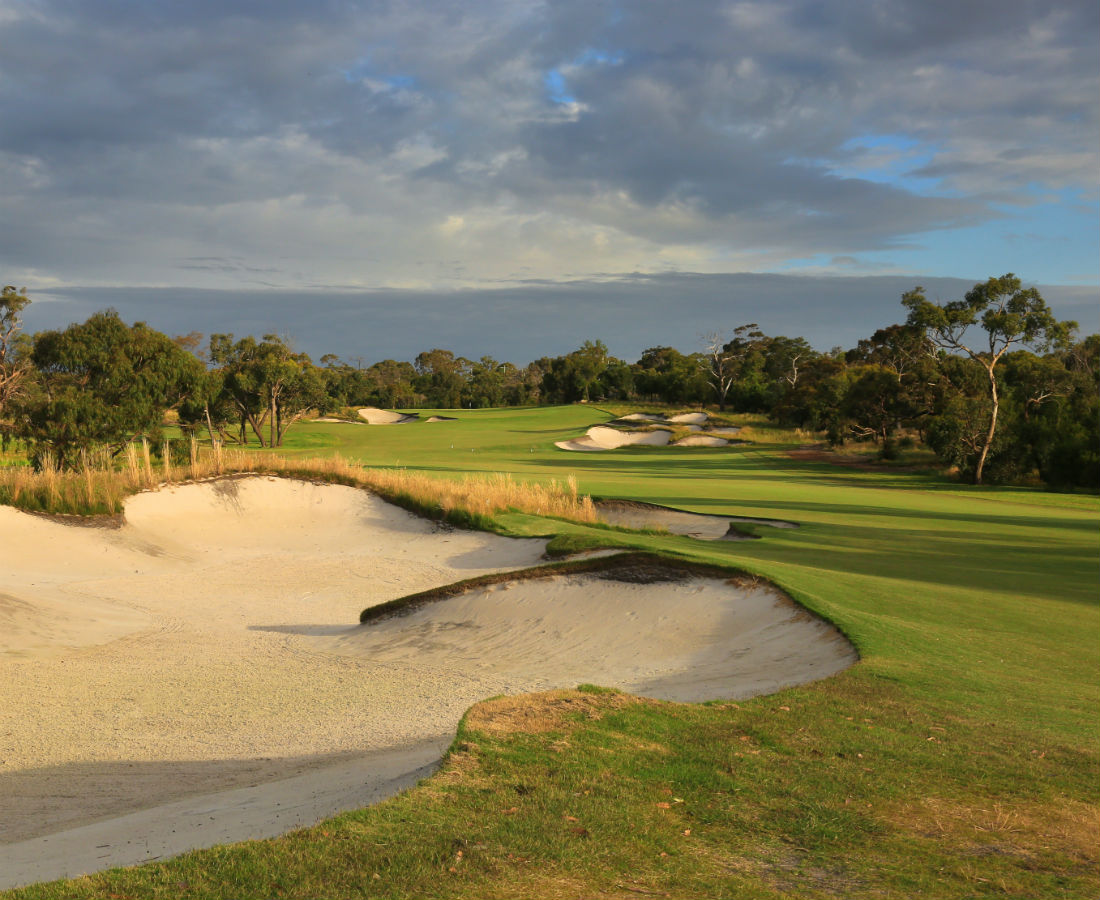 The 15th and 16th holes are par fives with this one – in contrast to the 16th – being easily reachable in two shots for the scratch players.

The fairway is wide but true fairway bunkers – bunkers entirely surrounded by fairway – all but force players to decide where best to play with the long second.  The green is long and quite narrow and an uphill pitch makes it difficult to get the exact distance right.